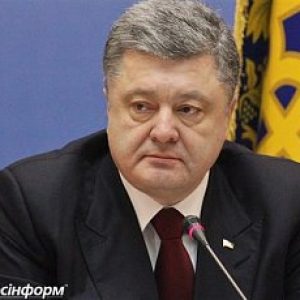 President of Ukraine Petro Poroshenko met with US Senator Richard Durbin. Ukrainian President stressed the importance of trans-Atlantic solidarity with Ukraine. "We need the unity of the Western world," - Poroshenko quoted by his press service.

President called US "a reliable strategic partner" of Ukraine. "The level of support that we have in the US, the US Senate is vitally important for us," - said Poroshenko.

The President noted the assistance provided by the United States in various areas - increasing the country's defense, the implementation of reforms, the fight against corruption, the process of deoligarchisation of the country. The President particularly thanked the United States for assistance in the training of Ukrainian servicemen of the Armed Forces on the Yavoriv training ground.

Separately, the head of state noted the assistance provided to the Ukrainian diaspora. Richard Durbin reported strong activity of the diaspora in Chicago, Illinois, which he represents in the Senate.

Recall, Senator Durbin, who is co-chair of the Subcommittee on Defense Committee on Appropriations of the Senate, in favor of an increase in financial support to Ukraine, in particular, to strengthen its defense capability. He also said that the newly created group (Caucus) in the US Congress is actively working to strengthen the support for Ukraine.

The President of Ukraine expressed his gratitude for the adoption by Congress the Freedom Support Act of Ukraine.