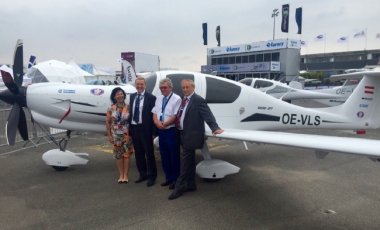 Ukroboronprom signed memorandum for adaptation of certification, production, sales and aftersales service of engines AI-450 for airplanes, which are produced by Australian Company - Diamond Aircraft Industries GmbH. Current arrangements were reached Ukrainian delegation in Le Bourget Airshow 2015, as it was reported by Press service of Urkoboronprom.

Zaporozhye Machine-Building Design Bureau Progress State Enterprise named after Academician A.G. Ivchenko is responsible party of such arrangements. This turbo-shaft engine AI-450 is intended for helicopters and planes with weight from 1500-4000 kg and can be used as a part of twin-engine and single-engined powerplant of lethal devices.

Ukrainian experts will not only produce, but also to accompany the work of these engines, to provide services to operational services.