Ukraine furnished USA with proofs of involvement Russia in war 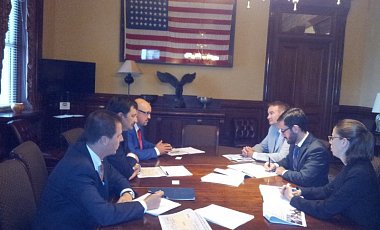 The representatives of National Security Council were informed about Russian active duty force and secret services contribution in was in Donbas.

As a part of visit to Washington, the deputy head of the Presidential Administration of Ukraine Andrei Taranov, and Head of Department of Security Service of Ukraine Vitaly Naida, held their meeting with the special adviser on European and Eurasian Affairs of US Vice President Michael Carpenter and director for Eastern Europe, US National Security Council, Liz Zentos. To American representatives were presented evidence of Russia's participation in the war in the Donbas, said the press service of the head of state.

Members of the Ukrainian delegation told about the participation of Russian regular troops in the war in the Donbas, noted the role of conflict in the Russian special services, which, together with the Armed Forces inspire subversive activities of terrorists on the territory of Ukraine shall be responsible for the delivery of small arms and heavy weapons to militants.

"The US side expressed its clear understanding of the Russian military presence in the east of Ukraine, expressed support for the Ukrainian people in their struggle for territorial integrity and independence of the state. An agreement was reached on practical steps in the field of security," - said in a statement.