Ukraine and Germany will collaborate in cosmic sphere 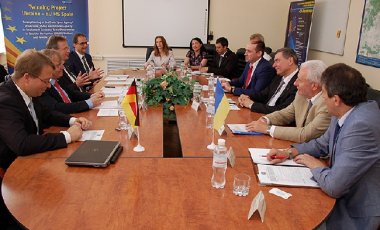 Negotiations of activating collaboration between Ukraine and Germany was passed before first meeting of common working organization of State Space Agency of Ukraine and Germany Aerospace Center (DLR) in Kyiv in 9 June. It is reported by press service of SSAU.

Both parties discussed perspectives realization of common projects with support of the program EU “Horizon-2020’, cooperation in cosmic sphere of space technology, distant atmospheric sounding and together creation of rocket technics.

As were underlined by representatives of the department, according to accepted arrangements, negotiations about collaboration will continue in meeting of the heads of SSAU and DLR during international aerospace show Le-Bouget-2015, and during Ukrainian-Germany aerospace forum, which will be held in June in Paris and Berlin.