The question of weapons is still open for Ukraine – State Dept 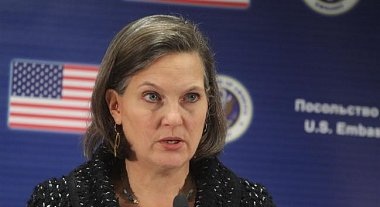 USA president Barack Obama has not still decided about delivery of lethal arms to Armed Forces of Ukraine for fight against Russian overrun.

For USA the question of delivery weapons is still open: the USA president Barack Obama has not still made final decision. That was announced in the interview of assistant to the Secretary of State in USA Victoria Nuland.

“The president has not made a decision yet about delivery of lethal arms to Ukrainian armed forces. The question is still under discussion. The decision will base on, what is the situation in the zone of conflict. The most preferable choice for us is abidance of Minsk arrangements: stop military actions on cordon lines, departure of military hardware, masters and supporting force from Ukrainian territory. That is what we and world community wants” – she said.

Nuland also noticed that USA helped Ukraine with 140 million dollars. “Among over deliveries were battery radiolocators: they were delivered with defensive goal.  Military training on Yavorovskiy firing ground (L’vivska district) oriented to improving Ukrainian possibilities in defense sovereignty and territorial integrity” – mentioned assistant to the Secretary State in USA.