Everything in the museum of nature called "Sofiyivka” have enchanting beauty. That’s the idea, a compositional decision of Sofiyivka in Uman made of imitations of the stories from the mythology of ancient Greece and Rome, and some places look like habitation of the Greek gods, heroes and thinkers.

Sofiyivka was grounded on 1796 by magnate and owner of the town of Uman that period named Stanislav Pototskiy. The park was named as a tribute to Stanislav’s wife - Sofiya Vitt-Pototskaya. Sofiyivka was a compliment to her name day on May 1802. Among Ukrainian sights, Sofiyivsky Park is one of the most interesting and beautiful places, where you could relax with family. Surely your child would be impressed by a sight.

Polish military engineer Ludwig Metzel was allocated as the head of the topographical and architectural design and construction manager of the park. All works were made by bonds of Uman.

Sofiyivsky Park in Ukraine was made in forestless region, severed by river called Kamesnskaya, beams and canyons that cut into the granite, often come to the surface. During creating was used a terrain, but there was no place for specific plan. Some areas were planted by local and exotic trees and shrubs, at the same time there were built the first architectural structures and decorations, created like sculptures, the most are ancient.

The main composition of Sofiyivka lay under riverbed of Kamenskaya in Uman, where were built a number of independent pools and ponds: upper - more than 8 hectares , lower - about 1.5 hectares and other waterfalls (one of them is 14 meters high), sluices, cascades, underground river Acheron (length 224 m). 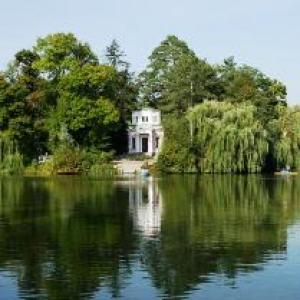 Sofiyivka is famous for illustration to different parts of the Homeric poems "The Iliad" and "Odyssey". Different parts of Homeric “Odyssey” were materialized in concrete objects. Any composition or small architectural form brings the idea of a specific plan, based on the idea of myth or some event, and all this is so well thought out and connected to each other, that in general is discharged into a symphony of beauty.

Sofiyivka area can be divided in some zones: Central, Eastern, Western, Northern and Southern zones. Any of these areas presents special construction and consists of different historical building, statues and grottoes, which are decorated by special nature objects. All of those create compositional harmony.

Northern zone of the Sofiyivsky Park

First of all, the park starts from the main entrance, which is lead to the Sadovaya Street in Uman. Behind it comes the central avenue. The main entrance of the tower was built on 1850 - 1852 years. There is place for The House of creativity of scientists of the National Academy of Sciences of Ukraine. This house has the original architecture, and on top of the building - an observation platform. Here is a hotel, sauna and restaurant for visitors.

The main entrance is simulated the entrance to the Athens market. The details of watchtowers were taken from the temple of the Italian goddess Vesta. Before the night of 3 April 4, 1980, the main entrance was decorated with balsam fir. Now here you can see two columnar arborvitae 20 years age. 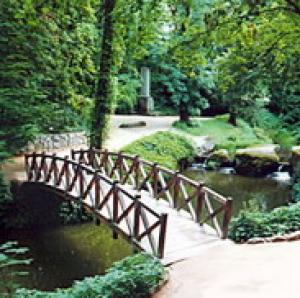 Among Lake Geneva is placed a territory of the meadow. There was built a wooden gazebo for guard soldier on 1841. It is reminiscent of a fungus, because the territory of the slope on the right while the Sofiyivsky park was named "Mushroom". Gazebo was restored in 1994.

Tayperskaya rock is placed near the main avenue. The wooden gazebo continues the rock. The Rock is named as a tribute to its Capitoline fort of Ancient Rome, which is saved for nowadays. In the days of Pototskiy, there was the end of the Sofiyivsky park.

The Alley ends with the pavilion of Flora. Before the building is located some area, where divaricate several roads. One of them is the road through the Venetian bridge and leads to the Upper lake. That is the central territory of Uman Agricultural Academy in Ukraine. Another road from the Pavilion of Flora leads steeply up to the left. That is the entrance area to Sofiyivsky park from the Kievska street, to the housekeeping area of the park There are advanced views of the park.

Compositional decision of the central zone of Sofiyivska in Ukraine based on scenes from the mythology of ancient Greece and Rome, and some places are imitation of habitations of the Greek gods, heroes, writers and philosophers. On the contrary Thunder grotto (the grotto of Calypso), is a water pipeline to supply. That area decorated by statues of Hermes and Venus.

To the east of the statue of Cupid on the left side are the granite steps that lead to the grottoes Loketek and Nut. They are created on the first period of construction of the Sofiyivsky park in Ukraine.

Nut Grotto is located on the right side. He completes the composition of the Valley giants. In the grotto carved granite Nut lava, and next to it is made three-stage waterfall.

Eastern, Western and Southern zones of Sofiyivska in Ukraine

The next part of Sofiyivsky park is called the Champs Elysees. Near the entrance to the Champs-Elysees is a natural form of granite boulder, and with him four-sided grinding hewn granite column.

The western zone starts with the entrance on the Kievska street, near which there are shops "Flora" and "Akvanary". There are the administrative and economic structures, created a rose garden , where there are more than 5,000 varieties of roses.

English Park named after V.V. Pashkevich located in Northern Zone. It occupies a small area and have a shape of a triangle, an area is ​​about 2 hectares. Its top is adjacent to the gate of Uman Agricultural Academy in Ukraine. Near the English Garden is located Ground amphitheater and greenhouse.

Any of those zones are fitted out with waterworks.

Sofiyivka is open daily from 9 am (although you can get into the park before). After 18 hours the admission to the park is free. It provides numerous guides.

At visitors’ disposal, in Sofiyivka in Uman, city of Ukraine, in addition to guided tours in the park you can swim in ferry, gondola boat, ride on the underground river Acheron, ride either on horseback or in the crew, make photos in the clothes that were fashionable in the XIX century.