There is a village in Dnipropetrovs'ka district with name Petrykivka. It is one of a few places, where folk arts are kept. Peter Kalnyshevsky founded Petrykyvka 230 years ago. It was the custom in that village: all women painted huts’ walls with floral colorful patterns. These designs were ornamented by special brushes that were made of cat's fur, as well as wrapped with soft cloth matches or just with fingers. Paints were diluted with milk and eggs and colors were chosen to match all the colors of nature - the brightest. 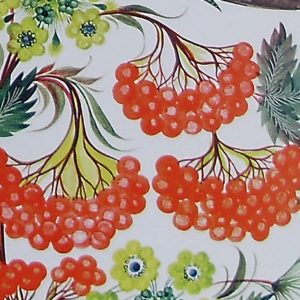 Hostesses organized some kind of contests in their pursuit to adorn house and make it more colorific than others.

Alexander Statev, rural school teacher, trying to save folk art, created a school. He took Tatiana Pata, one of hostesses, as a teacher. One of the students, Fedir Panko decided to commit himself to folk arts. Mostly thanks to his pains was created art union with name Pertykivka.

Since that time Pertykivka masters took part in paintings of different pavilions, shops and exhibitions in Kyiv and Moscow. At first sight there is nothing cardinally new, but it is mistaken opinion. During ornamenting one or another interiors, Petrykivka masters transferred very similar interior design for the new premises, and changed only scale so that it match the size of a  room. In 1960 - 1970, the folk art completed the formation of decorative monumental painting.

Petrykivski peasants gradually began to stand out a group of semiprofessionals. They were not painted only interiors of houses, but also applied art painting on folk musical instruments, trunks, winnowing, sleds, and in the early twentieth century began to make drawings on paper.

in Ukrainian folk art was approved the varnished painting, masters who were creating in the field of decorative graphics, decided to return to painting utensils made of wood, but that process looks a little different now. Shape of wooden dish machined on a lathe, but is no longer, as it once was, imitation earthenware products. Shadow figure of new dishes are similar to pottery typical to the south of Ukraine and the Poltava region with rounded and smooth lines. Petrykivka art painting with oil paints applied on well enough polished surface without using pre-laying background. There was used a little polish, which was mixed with paints. Thanks to that, they became transparent. A tree was easily shining through such paint. First dishes were ornamented in 1963. 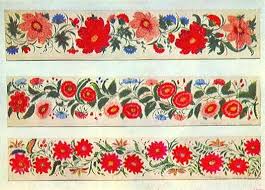 Another specialty of petrykivskaya painting was a high graphical work, decorativeness of all parts of composition and restraint in range of colours (black, yellow and red). That was a new modification if traditional dishes paintings, based on the same modern. Quite beyond Ukrainian bounds became famous names of a few maters from Pertykivka.

History of Petrykivsky ornament has its own technique, plastic language and a set of artistic images. Painting tradition passed down from one generation to another. Original, mostly floral ornament, as the years passed, more and more improved. 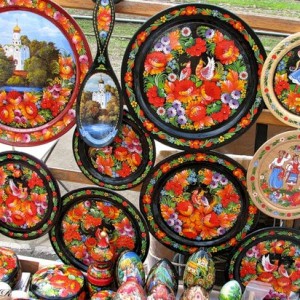 Present Petrykivka decorative painting, was characterized primarily as a vegetable, flower. It is based on a careful study of real forms of flora and creation based on these realities not existed in nature, fantastic colors (for example, "onion"). There are widely adopted motives of meadow (cornflower, Romany) and garden (roses, dahlias, asters) flowers, grapes, berries of arrow woods, strawberries. Also characteristic is the image of fern leaves, openwork feathery foliage and buds.

For painting on paper Petrykivka masters use egg tempera, and in the mural painting used - gouache, oil paints and egg tempera - on the ground, on a wooden surface is dominated mainly varnished painting, oil painting inflicted. The main plot of the traditional composition are: "bouquet", "frieze", "twig", decorative panels, which often resembles a carpet manufactory about XIX century. Types of these compositions are often used in construction, when applied to the mural as a component of architectural decoration of interiors.