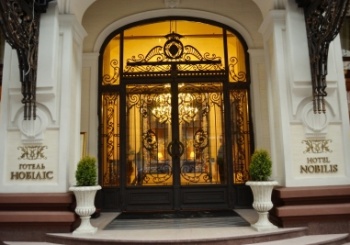 At the end of the last year in Lviv the new 5-stars hotel of «Nobilis» was opened in a center a city. Lviv hotel «Nobilis» which will work directly on Euro-2012. A hotel is contracted UEFA on the period of championship and certain as a transfer, revealed to the Informative center in press-service of complex.
The infrastructure of hotel includes two corps, three restaurants and bar, one of which round-the-clock, conference hall into 60 places and room for negotiations into 10 places, opened both for the guests of hotel and for habitants of Lviv, SPA-and fitnes-center.
The containing a number fund of hotel is counted by 49 numbers of 4 categories: A standard is Classic, two - rooms de luxe suite Prem'er, de luxe suite Ambassador and three-rooms de luxe suite Nobilis. We will remind, Lviv will accept during Euro the combined teams of Germany, Portugal and Denmark.