Kiev Pechersk Lavra in Ukraine is one of the biggest and greatest Orthodox churches. Monastery of the Ukrainian Orthodox Church has rank as a lavra. According to Nestor’s Chronicle it was founded in 1051 by reverend Antony as the cave monastery.

Interesting facts about history of Kiev Pechersk Lavra in Ukraine

On the basis of historical facts Kiev Pechersk Lavra is one of the monasteries in Rus, which set up a monachism. St. Anthony and Foektist, the abbot of Esphigmenou Monastery, on distant Mount Athos created the monastery originally as a cave monastery. This contribution had not gone unnoticed. People started to come for blessings and spiritual advice. Prince Izyaslav, son of Yaroslav and his Kievan nobility had often visited the cave monastery. 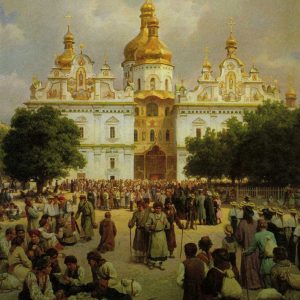 With help of their facilities there were built above ground and monastery cell, where the caves were close to the brethren, the amount of which rapidly increased. In 1062 St Anthony put the first abbot St. Barlaam and went into a remote cave, where he remained for 40 years.

After the transfer of St. Barlaam as a abbot to Holy Monastery, St Anthony blessed to igumen St. Theodosius as the most humble and benign of brotherhood. When the monastery had 100 monks, Theodosius sent one of them to Constantinople to the eunuchs Yerefema to rewrite Studiyskyy arose to bring it to Kyiv.

An important event in history was the foundation and construction of the Church of Assumption of God’s Mother. The church was built over 15 years by Greek architects and painters. It was blessed in 1089 by Metropolitan John.

Kiev Pechersk Lavra in Ukraine, like other monasteries of the empire, had devoted significant resources to the development of education, held its own primary school, seminary, appropriated funds for the education of poor students Diocese of Kyiv and even established five scholarships in the spiritual and educational institutions Kyiv and Kostroma.

History of Kiev Pechersk Lavra noticed that monastery had not passed its royal attention by any of the Russian Tsars: Peter the Great, Catherine II, Nicholas I and Nicholas II, Alexander I, Alexander II, Alexander III, Paul, Elizabeth. When visiting Laura kings, as well as the subjects took the blessing of the abbot. Romanov transferred to the monastery in person or through his messengers gold crosses and lamps, richly decorated with diamonds salaries prayer books, vestments of gold embroidery, brocade and cypress tombs for the dead saints.

The great cathedral church of the Assumption of Holy Mother is the first stone building in Kiev Pechersk Monastery. Consolidated miraculously on land, it was granted for such a sacred cause byc Sviatoslav Grand Prince of Kiev. 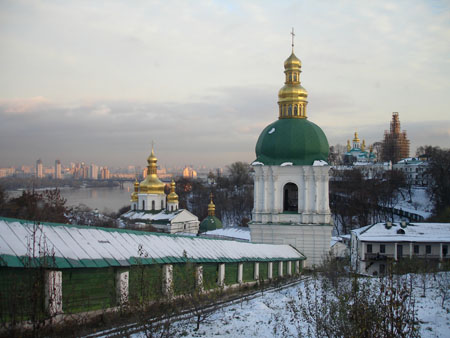 Assumption cathedral belonged to the type of cruciform church buildings and became sort of a standard Old Russian church architecture. During the occupation of Kyiv November 3, 1941 Assumption Cathedral was blown up. There are two versions of this barbaric act. And none of them has any conclusive evidence or objections.

The dominant feature of the complex Near Caves is Holy Cross Church. Discreet and seemingly ugly from the outside, which was typical for the initial period of the Baroque style, inside it is striking in its grandeur, magnificence and beauty.

The current stone Holy Cross Church built on the place of a wooden expense Poltava Cossack colonel P.Hertsyka in 1700 and is the oldest of ground facilities of the complex and its architectural composition is characteristic for Ukrainian wooden churches in XVII century. The church survived without big changes and is an excellent illustration of the architecture of past centuries.

The iconostasis of the Holy Cross Church

While crossing the door of the Holy Cross church, everybody stay impressed of indescribable beauty and grandeur of its interior decoration. The decoration of the temple and all the Lavra is magnificent carved gilded three-tier iconostasis, made in style of rococo. Its carved basswood their own drawings Kyiv-carver Snitsar K.Shverin in 1767 - 1769 рр. The iconostasis is decorated with Corinthian pilasters. Icon cases on both sides of the iconostasis made by K. Shverin. Icons of the iconostasis wrote to talented painter Z. Holubovskiy.

Great Lavra Belltower is a glory of the architectural ensemble of Kiev Pechersk Lavra. It stands in the center of Cathedral Square; its golden head is clearly visible from the distance of Zadneprovski and the seven hills of Kyiv. This magnificent building is a four-octagonal tower height of 96.5 meters, and features a rich architectural and artistic decor Baroque. For interesting are three reliefs of XV, built over the entrance to the first tier of the bell tower, depicting the Mother of God and the founders of Kiev Pechersk Monastery - Saint Anthony and Theodosius. Bell tower crowned with gold helmet-shaped bath.

The unique charm of the architectural ensemble Far Caves provides sevenfold Nativity church, which is situated on a high bastion. Built in 1696 in the Ukrainian Baroque style, it is the oldest of all the land of religious buildings, preserved in the Kiev Pechersk Lavra. It was built with help of Kyiv colonel Konstantin Mokyivtsi.

The Nativity Сhurch stands on the site of the ancient church of the same name, which, in turn, has been put in place several generations of wooden churches, which were reconstructed many times. But first there was built the first ground monastery church - wooden Church of the Dormition at which formed the ancient Monastery of the Caves.

The bell tower of the Nativity Сhurch

Fabulously beautiful in building ensemble of Far Caves are bunk tower. It stands next to the Nativity church, a two-storied octagonal shape of the tower dome. The first level is made for the passage of pass, in the second level - four arched openings for bells.

The walls of the second level are decorated with wonderful stucco ornamentation, which is dominated by floral motifs and decorated Corinthian columns. The bell tower topped by a delicate gilded baroque dome, around which are located at the corners sharp upward gilded spiers, creating a dome shape with a rare beauty silhouette. Ensemble of the Nativity Church is a masterpiece of Ukrainian baroque.