In petroleum installation near Kyiv are on fire 16 cisterns 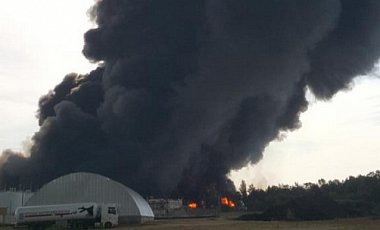 In location of exposure are situated one more oil product depot KLO. Everybody is evacuated. There are making security cordon.

The main efforts focused on extinguishing the burning tanks by means of a foam attack, as well as protection and cooling are located next to them with fuel tanks.

"At 8:00 on June 9 as a result of the spread of fire occurred detonating ground tanks." The volume of damage and number of victims specified, "- said in a statement.

Earlier, Interior Minister Arsen Avakov said that in connection with the explosion at the oil terminal near Kiev raised the alarm the National Guard of Ukraine. According to him, "in the zone of fire, base oil KLO all are evacuated. There were exhibited cordon."

The fire injured five people, who with burns and poisoning by combustion products of varying severity were hospitalized.

Recall the night before the fire broke out around 17:30. Earlier reports of the four victims. The BRSM-Nafta said that the probable cause of the fire could be arson. According to the preliminary version of the Interior Ministry, the fire broke out due to "technical reasons".