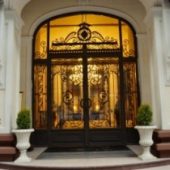 At the end of the last year in Lviv the new 5-stars hotel of «Nobilis» was opened in a center a city. Lviv hotel «Nobilis» which will work directly on Euro-2012. A hotel is contracted UEFA on the period of championship and certain as a transfer, revealed to the Informative center in press-service of complex. The infrastructure of hotel includes two corps, three restaurants and bar, one of which round-the-clock, conference hall into 60 places and room for negotiations into 10 places, opened both for the guests of hotel and for habitants of Lviv, SPA-and fitnes-center. The containing a... 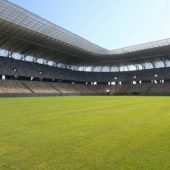 Lviv stadium «Arena Lviv» took the eighth place among 27 stadiums which were opened in 2011. The proper competition «Stadium-2011» from January, 11 for February, 11 conducted the popular Polish internet-portal of stadiony.net. In a list objects entered by a capaciousness no less than 10 thousand places which were built «from a zero», opened in 2011 and on which even one mass measure took place already. 11 859 persons took part in questioning! Ukrainian Lviv stadium «Arena Lviv» collected 8200 voices of respondents and took the honoured eighth place between «Juventus Arena» (9517... 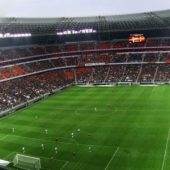 Donbass Arena stadium was designed long before decision about to host Euro 2012 in Ukraine had been made. Actually, Donbass Arena is the first stadium, which was ready to receive guests at Euro 2012. Therefore, "Donbass Arena" is a stadium located in the heart of the city Donetsk in the city park of culture recreation. The opening of the stadium on 29 August 2009. Donbass Arena stadium calculated for 50 000 spectators. This is the first stadium in Eastern Europe, designed and constructed according to the standards category "five stars". For accreditation UEFA and FIFA - the building with the... 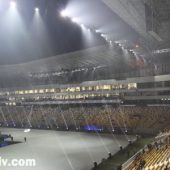 General information about Arena Lviv Stadium The stadium Arena Lviv is one of the newest stadiums in Europe, which will take football championship Euro 2012. The stadium Arena Lviv will be the center of the football matches and entertainment, international, nationwide and local value. During football matches, concerts and entertainment sports arena in Lviv will take more than 30 thousand visitors. The design places the stadium is designed in such a way as to create maximum effect of the presence of spectators on the field. All stands are under cover, part of which is transparent. Extensive... 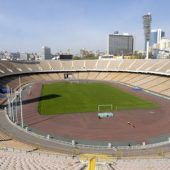 On Saturday, October 8, 2011 after a lengthy renovation opened Kyiv Olympic stadium, NSC Olimpiyskiy. Formerly called the National Stadium and looked like this: And now the Olympic Stadium is home playground of the country, to which 1 July next year and will be the final match of Euro 2012. Capacity - 70 050 seats. Of these, 150 seats are equipped specifically for theDisabled, 1497 - for journalists, 366 - for commentators. Here is the Stadium Olimpiyskiy today: And the opening day of Kiev Olympic Stadium looked like this: Pictures of the Olimpiyskiy Stadium Bird's Eye View We...

In 2012 Ukraine become more popular for tourists orientation abroad. It is reported that in the latter half of the 2012 Ukraine rose from 85 to 76 places in rating of World Economic Forum. Besides, the world-famous tourist publications start to advise Ukraine as worth place to visit in Europe as much cheaper, but not less beautiful.

Euro 2012 demonstrated a level of football, which the world has not seen since 2000, when the tournament was held in the Netherlands and Belgium.

That topic includes information about one of the most important event in Ukrainian life, includes facts about hotels, stadiums, main games, persons, involved in preparing the championship, our national team, etc. There are four great stadiums, where took places the most important games of Euro 2012: NSC Olimpiyskiy, Arena Lviv, Donbass Arena and Arena Lviv. These constructions impressed with their greatness, beauty and splendor. Arena Lviv is in the list of 10 the best stadiums in the world.

Great hotels in Euro 2012 in Ukraine

There are interesting facts about famous hotels, which were visited by over 1 million tourists during Euro 2012 in Ukraine. In preparation for the Euro – 2012 in 2011 in Ukraine was opened nine modern hotels on 1044 numbers. Among them, four five-star hotels, three hotels level “four stars” and two hotel -level “three stars”.

The most famous among newly opened are “Royal Hotel” in Truskavets, “Superior Golf Hotel”, “Park Hotel” and “Kharkiv Palace” in Kharkiv, “Shakhtar Plaza” in Donetsk, “Transfer” in Lviv, “Olimpiyskiy”, “Grand Fairmont” in Kyiv, etc. These hotels are notable not only for their beauty and splendor, but also for their amenities.