80% of Ukrainian transport do not answer requirements of safety 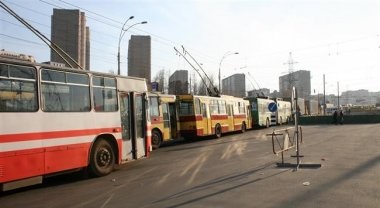 Among the operating 6,2 thousand units of transport, over 80% don't answer the requirements of safety. They are worn-out morally and technically.

For years of independence the quantity of units of city transport in Ukraine decreased from 12,3 thousand to 6,2 thousand. Such data were sounded today by the deputy minister of infrastructure of Ukraine Vladimir Shulmeyster at a seminar about development of city public transport.

According to the statement of the deputy minister, since 1991 investments into city public transport have been actually stopped. "It occurred against a tendency of reduction volumes of carriage of passengers and deterioration of transport service and level of traffic safety. Because of it there were share taxis which the movements and to the general requirements to modern city transport don't meet safety requirements", - he noted.

According to Shulmeyster, from the operating 6,2 thousand units of transport of 80% don't answer the requirements of safety, are worn-out morally and technically. "The minimum needs for updating of rolling stocks are not less than 400 new trolleybuses and 200 new trams in a year for today. Thus for all 2014 it was succeeded to buy only 60 new trolleybuses and only two new trams, that is, today we are close to paralyzing the program of replacement of city transport", - he told.