Expecting the holiday, dedicated to all lovers the question arises as to where celebrate St. Valentine’s Day. Here is top list of the most romantic places in Ukraine, where every couple could rejoice their day and cloister themselves.

10. The bridge of lovers in Zaporizhzhya.

This bridge is one of the most popular places in Ukraine, situated in Voznesens’k Park close to Dnepr river bank. That is beautification of the city, actually very popular in St. Valentine’s Day.

The cascade of waterfalls “Rainbow” is situated close to the bridge. Unfortunately, it doesn’t work in winter. 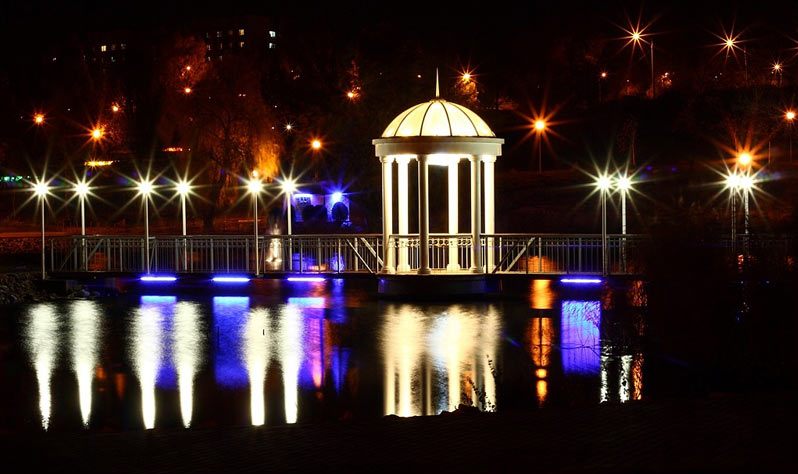 9. “Heart of lovers” in Odessa

That is art installation in form of heart, situated in Zhvanetsky avenue, not far from “Good-mother bridge”. The idea was for saving “Good-mother bridge” from symbolic locks of love and, surely, create place for sharing sweet feelings in St. Valentine’s Day in Ukraine. 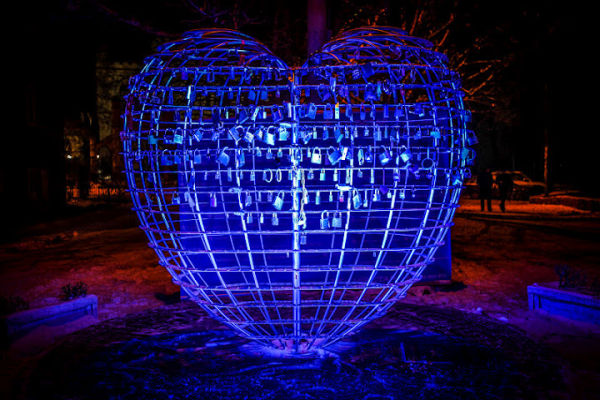 That original construction renews interesting tradition of newlyweds to hang locks, symbolic bonding their union for many years. That “heart” can withstand over 2 thousands locks.

8. Waterfall “Zebras in love” in Paysage alley in Kyiv

Kievans and city visitors come here to save themselves from life fuss every season and time a day. Funny sculptures, particularly waterfall with zebras, make everybody smile. That place is popular mostly for young lovers in St. Valentine’s Day in Ukraine. 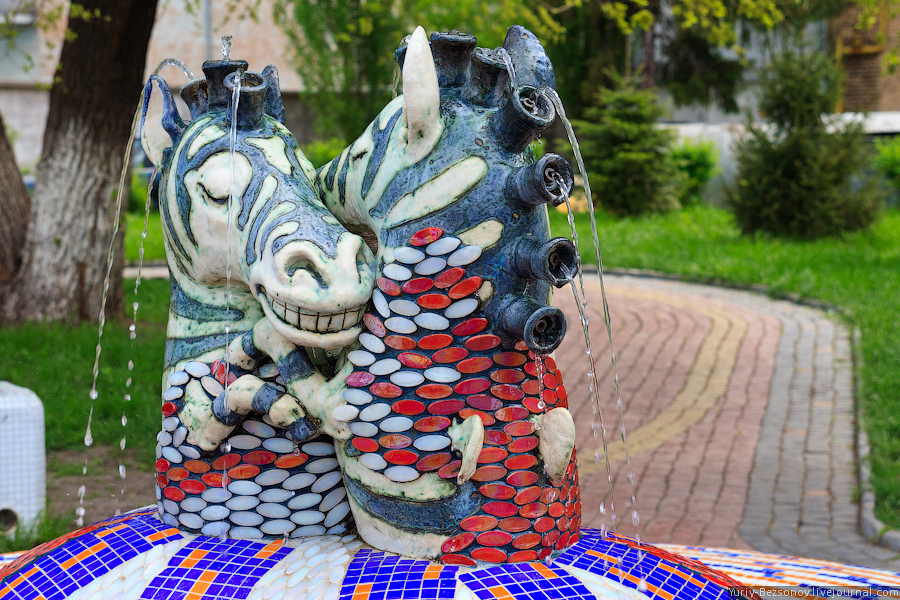 That is incredibly beautiful place for visiting in St. Valentine’s Day. That is save-choice for lovers to cloister themselves. First of all, it is because of history of its creation – Polish magnate Stanislav Pototskiy made a compliment to his beloved wife Sofiya.

It s situated in forestless region, served by river Kamenskaya. That park is famous for its special compositional decision and stylization under the stories from the mythology of ancient Greece and Rome. Special atmosphere is suitable to visit in St. Valentine’s Day.

6. Park of forged figures and bridge of lovers on Donetsk

The park was opened on 2001 close to Donbass Arena and major’s office. Every year here is hold festivals among farriers. They present different figures.

Nearby is a glade of fairy tales, which are carved out of basswood and hornbeam solid wooden sculptures of fairy tale characters. The park is represented over 220 metal compositions. 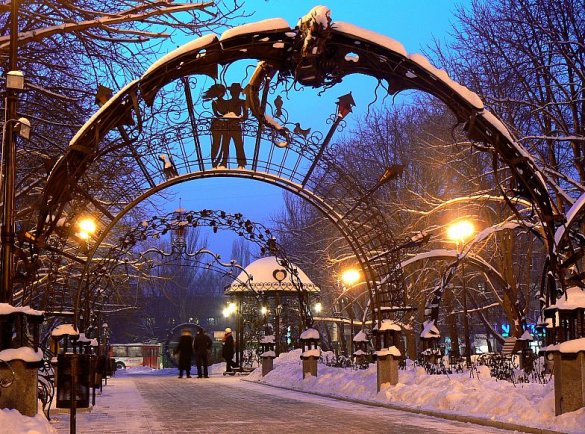 It is situated in center of the city – Rynok sq., 6, and is the central part of Kornyakta Palace.  That place is unknown, but for all that here is never peopleless. Ideal location for couples at St. Valentine’s Day in Ukraine. Stunning architectural monument of the Renaissance, which is considered to be one of the most beautiful and romantic jewelry of central part of the city. Italian (Venice) patio is remarkably similar to the typical courtyards of Rome and Florence. No wonder, in XVII century it was here stage of Shakespeare’s plays. 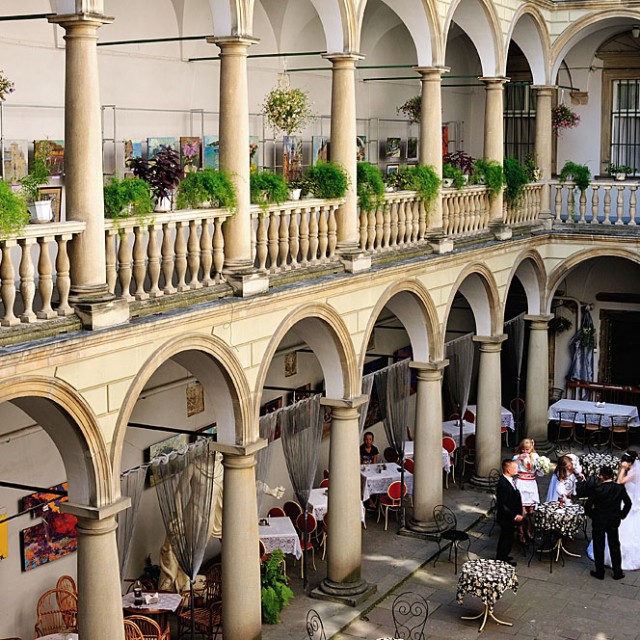 4. Waterfall “Amour” on Alley of lovers in Dnepropetrovsk

Symbolic alleys of love are almost in every city of Ukraine. But in Dnepropetrovsk it is special.

Here are bench of exhaustible waitings, alley of pleasant meetings, cooper “Towel”. The last is situated under darts of love in “Amour” – the sculpture of waterfall is naturally complement the composition.

Citizens have the legend that the towel is very powerful - it is able to reconcile the quarreling lovers and forever connecting loving hearts.

3. A monument to lovers in Kharkiv

Students were initiated a creation of such a monument in Ukraine. It has been announced a competition among them for the best sculpture. Dmitry Ivanchenko’s work won the competition. Later was decided to decorate it with waterfall. It is an arch formed by flying , fragile figures of boys and girls, merged in a kiss. So good place that couples should visit at St. Valentine’s Day in Ukraine. 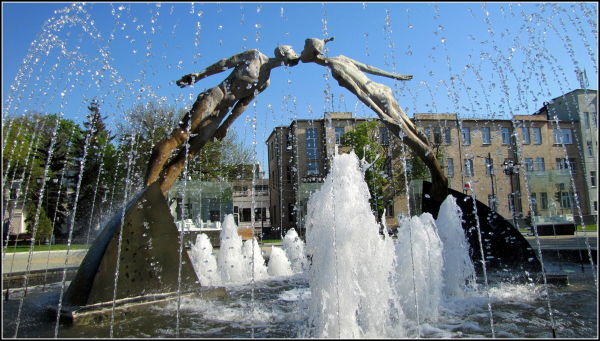 That is used to be subway to Orzhakivsky woodworking enterprise. Nowadays there is other purpose – people go there for sweet feelings. The tunnel has a length of a few kilometers and it looks like a miracle of nature.

Tunnel - a place of pilgrimage for tourists and couples in love. There is a tourist legend, if lovers who will pass through the tunnel, make a wish, this wish will be granted. Some newlyweds put there flowers that symbolize their feelings. 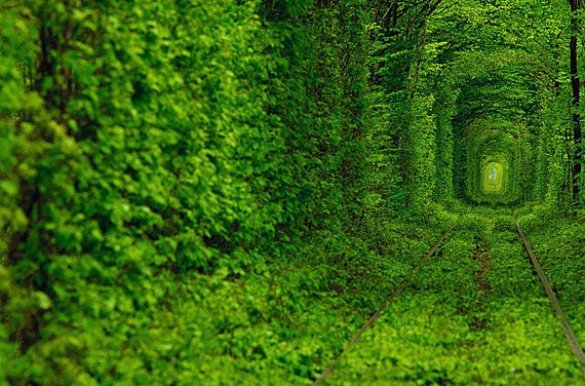 1. Island of lovers in the center of Ternopolsky pond

Island of lovers is situated among Ternopolsky pond. That is a big made reservoir, which if almost one-year age with the city. The island was created during making the pond in the time of WWII. You can reach it by special bridge or by boat. In winter, when the pond freeze up, you can go overice.

Its cozy benches scattered here and there among the woodlands of willows, poplars and birches closes its discordant dance at the railing of the bridge connecting the island with the mainland to become the guiding light of the problems of life in the kingdom of peace. 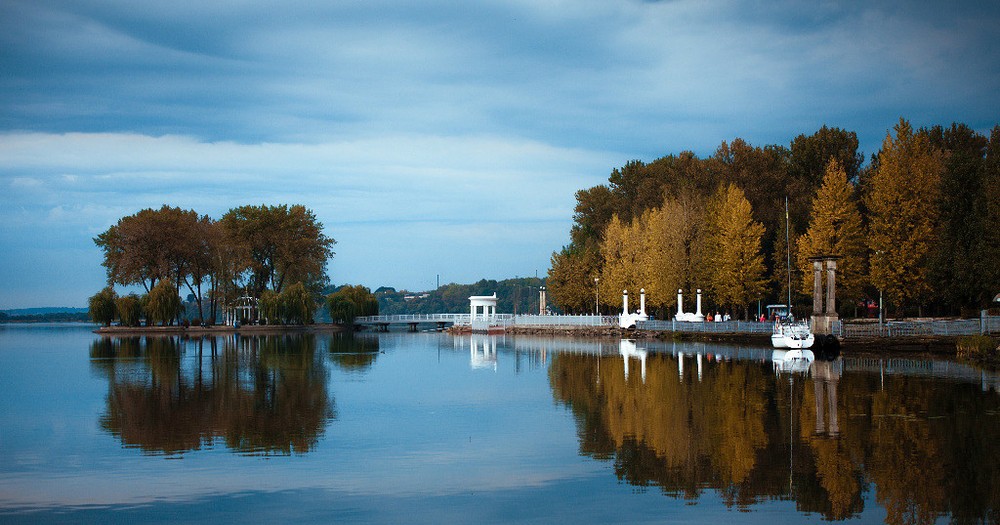