Four boats will get to Special Forces of Naval Forces of Ukraine in Odessa and Ochakov, and a seven-meter will give the search and rescue service of the fleet 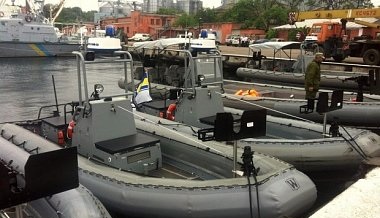 Five American speedboats Willard Sea Force 730 and Sea Force 11M, which the United States handed over our country who have successfully mastered in Odessa.

Price of Sea Force 11M is about $ 850 thousand. Sea Force 730 is worth about $ 350 thousand. (Price depends on configuration and conditions of the contract).

Four boats will get Special Forces Naval Forces of Ukraine in Odessa and Ochakov, and give a search and rescue service fleet. "Options boats chic - each worth navigation radar Furuno. There are machines for 7.62-mm machine gun, which is extremely important for the Special Forces. Also with them comes with a number of" consumables ", spare parts and tools, as well as warranty service from the manufacturer! In addition, the Americans two weeks preparing those who will serve them, and exploit ", - told the publication editor Ukrainian Taras Chmutov of military portal.

"What are these boats for? Special forces - for quiet and fast delivery of certain groups in the area to patrol bases, places of dislocation, ports, raids, for anti-sabotage defense, as the Inspection to check the boats. Search and rescue units - for quick retrieval on the water. Ukrainian Navy needs tens of boats, "- he said.