Along with embroidered towels and Vyshyvanka, Ukrainian Pysanka (Painted Easter egg) is one of the oldest branches of Ukrainian folk art. The first acquaintance with Ukrainian ornaments reveals common with ornaments of similar objects from a Tripoli culture.

Ukrainian tradition of painting Easter eggs is rooted in ancient times, when people have not so much detached from nature. Why the egg? Perhaps that ancient people struck by the appearance of inanimate objects a new life. The symbolism of Easter eggs - a symbolism of joy, and so it has come since ancient pagan times to us. Easter egg symbolized the rebirth of spring nature, warmth and victory of light over darkness, cold, winter and night. Our ancestors were wise, and thus able to combine Christianity with ancient beliefs, the idea of combining salvation from the darkness of the lightest ancient images of the past. That is the adoption of Christianity Easter eggs, gradually entered on Easter rites, are symbols of Christ's resurrection. Thus, dyed (dyed in the colors of the rainbow egg) and Ukrainian pysanky (eggs, painted and painted a variety of signs, that was the kind of ornamental symbols) are archetypal symbols of infinity in his eternal life peretvoryuvanosti, promynalnosti-vidrodzhuvanosti in Christianity - God's resurrection and rebirth nature. 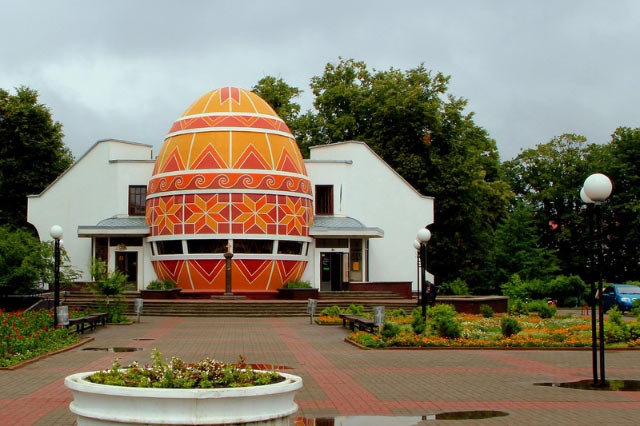 In Ukraine there are several museums, which holds eggs and egg-painting technology. In Kiev, the National Museum of Ukrainian Decorative Folk Art department is eggs. The famous museum "Easter egg" in Coloma, in Ivano-Frankivsk. In Skhidnytsya, Lviv region, recently opened a monument to the egg. A large egg painted villagers and students of the local school. So they found respect for ancient traditions and indissoluble spiritual connection to the ancestors, to their roots.

Other nations of the world revered the egg and have their own attributes his praise. And apparently none of the people not told until today its autochthonous graphic picture of life so clearly, as Ukrainian. 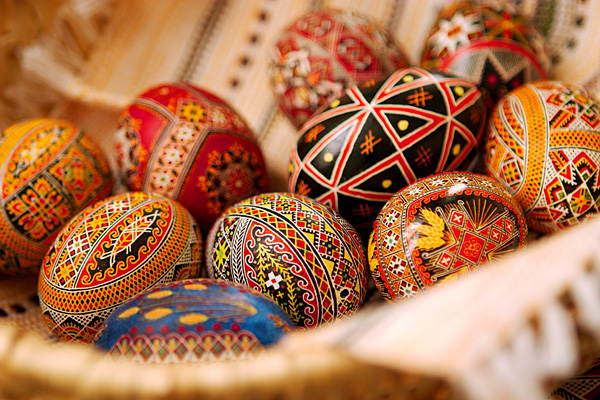 How do the complex multicolored egg with pattern is born? Originally by pysachok (a special brush) applied to unpainted egg those strips, that elements of the ornament, which, by design, must be white. Then dip the egg in most lighter paint, usually light yellow. Then on dry surface painted eggs put wax line, which should be light yellow color, and then dipped in egg dye, say, dark yellow, then write the elements of dark yellow and lowered egg to have darker colors - red, then under to dark cherry, brown or black. Finally the egg is heated in a furnace or hot water to come down the wax - and Ukrainian Pysanka is ready. 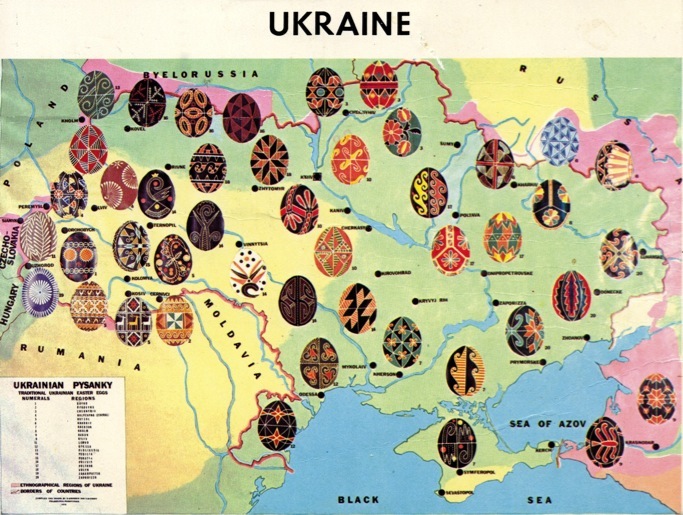 The fame of the beauty and originality of the Ukrainian Pysanka have long reached the farthest countries. Many foreign museums interested in them. The largest collection of Ukrainian Pysanky outside of Ukraine is in the Royal Museum in St. Petersburg, the former Museum of Ethnography of the Soviet peoples in Krakow and Prague museums.

History of Easter eggs as a symbol of spring nature awakening reaches daleve in the past and is associated with the ritual of spring revival zemli.Peretvoryuvaty usual egg Easter Egg on magic in the old Slavic habilis every woman. Keeper of the hearth was from year to year "update the world." For this sacred cause it except eggs needed: there's no water, there's no fire, new pots, new linen cloth, beeswax, candle, paint, broken in two-bone plug, taken with cock lumps.There's no fire procured host family, there's no water at midnight mistress took the seven sources. Paints extracted from the petals of flowers, bark, roots and leaves. Pattern masters not invent and write off of last year's Easter eggs - from year to year, from grandmothers, great-grandmothers. And to the subjects involved in the preparation of Ukrainian pysanky, none other than the lady, not even dare to touch. 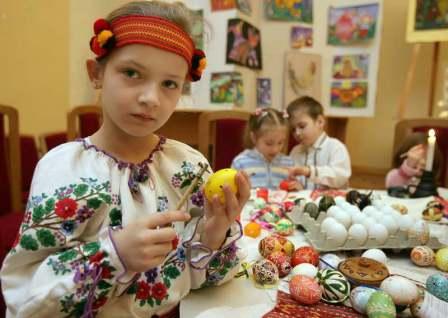 So far our ancestors wrote Eggs . This tradition has for nearly 8000 years. Of course, eventually writing rules simplified. Water is simple, boiled, Easter eggs pysanky - specially made as a small metal funnel, and paint are taken as "from God and from the people." But tradition had passed all odds and managed to survive to this day.