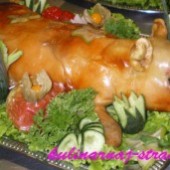 Pork is very fond of the Ukraine. Ukrainian borsch and salo (fat) are known all over the world. A behold recipe of roasted pig with stuffing. One of the most nourishing dishes is chicken stuffed with some grains - is immediately and meat dish, and garnish to it. For this recipe cooked chicken stuffed with buckwheat. Filling during baking soaked chicken fat and become more delicious. Interesting about Ukraine » Ukrainian food WHOLE ROASTED PIG (RECIPE) Cleaned and washed pig soaked in cold water 1.5 - 2 hours, removed and made dry with clean towel, salt inside Since buckwheat meal cooked... 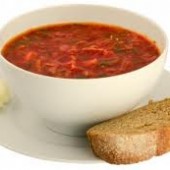 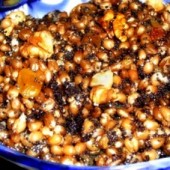 The main attribute of a delicious Christmas menu in Ukraine still remains Ukrainian kutya. There are many recipes of kutya, but today you will find unusual recipes of kutya, which are popular in different regions of Ukraine. The classic recipe is kutya with a wheat, poppy seed, honey and nuts. However, it is often made from barley, rice, millet, and even bobalek - balls of dough. In different regions of Ukraine preparation of kutya, as relevant to this ritual dish is different, but almost every family is that they kutya - if not the most correct, then certainly the tastiest. Thus, in the Kyiv...

Ukrainian cuisine is mostly known for its selection of special products and for technology of cooking. Ukrainian cuisine fills an important place among other world, and, of cause, Slavic cuisines. It has spread far abroad of Ukraine and some Ukrainian products, such as borsch and dumplings are included in list of dishes in international cuisine. Our national cuisine is mostly related to Belorussian and Polish, but it doesn’t stay on the way of individuality of our cuisine.

There are innumerable list of products, which are special for our national cuisine. First of all, it is lard. It can be used as self-dish or as a component to other specific dishes. That product is very popular all over the world and is known as inalienable part of Ukrainian national cuisine.

Popular products in cuisine of Ukraine are:

Ukrainian cuisine evolved over the centuries to a sufficiently large and fertile territory. Because of this, it has a wide range of food ingredients. With significant regional differences due to the different set of source of food Ukrainian cuisine has and many common features for all regions. Ukrainian dishes are known for their diversity and high taste.

The main dish on the table is considered to be the bread – wheat or rye. In world cuisine famous Ukrainian borsch is very popular and there are many cooking options of it. Ukrainian cuisine is closely connected with the traditions and religion, so there is a wide selection of Lent dishes. But it is not only these dishes. Here you can find information about number of national Ukrainian dishes, which impress you with its tasty.