Without this monument is difficult to imagine the face of modern Kyiv. In the eyes of foreign tourists it generates associations of our city. “Rodina mat” raises above all - the hills, the slopes of the Dnieper, bridges and gold-domed temples. It is clearly visible from the farthest points of the capital. Especially, it can be seen from the left bank of river Dniepr, where our guests often begin their acquaintance with Kyiv. Going on a trip from Boryspil airport or from many hotels in left bank, people admire the panorama of the right bank and, of course, pay special attention at this monument.

Some historical aspects about “Rodina Mat”

The work of creation began sculptor Eugene Vuchetych - author memorial "Motherland Calls" in Volgograd, opened 14 years earlier. After the death of Vuchetycha work continued Vasil Boroday - Ukrainian sculptor, who was especially respected in Kiev for  the monument to the founders of Kyiv.

The height of the monument from the beginning of the socle to the point of the sword is 102 meters: without socle - 62 meters. It belongs to the ten highest in the world. The whole structure is welded and weighs 450 tons. It is estimated that the statue can withstand an earthquake of 9 points.

Interesting facts about the monument in Kiev 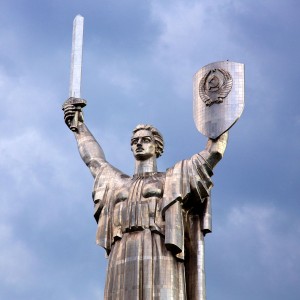 Initially planned to cover the monument with gold leaf, but soon abandoned the idea.

Inside the sculptures were installed two lifts - vertical and tilt; latest moves on rollers at an angle of 75 degrees. Also inside the sculpture includes viewing platforms. Pedestal room serves Hall of Fame Museum of the Great Patriotic War in Kiev, and around the sculpture - the open part of the museum.

The monument is a place where you can admire Kyiv. This will help viewing platforms, one located on the edge of the pedestal and sculpture, the other - on hand with a shield.

According to legend, during the construction of the monument there were negotiations between the government and representatives of the church. Latest insisted that the sculpture was not higher than the Great Lavra Belltower, because peaceful town of arms can dominate cross. Then it was decided to shorten the sword sculpture. Although the whole height of the monument exceeds the height of the bell tower of the Kiev-Pechersk Lavra, the tip of the sword is actually below the tops of the bell tower.