Normandy Four meeting: Ukraine will try to consolidate the position of peaceful world

Now it is important for Ukraine to hear from Russia about escalation of Donbas conflict, noticed representative of Ministry of Foreign Affairs of Ukraine Aleksey Makeev 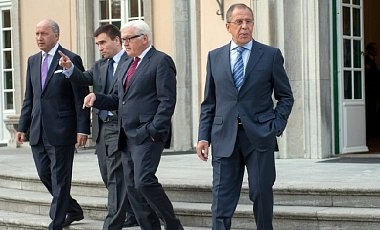 On the meeting of foreign ministers of Ukraine, Germany, France and Russia, this will be in June, 23 in Paris; Kiev will try to consolidate the positions, which were consolidated before in peace talks. That was said by head of Division of politics and communication of Ministry of Foreign Affairs Aleksey Makeev in comments to Radio Svoboda.

“In sober facts, our main problem during this meeting – to analyze of provisions implementation in complex all 13 provisions. We intend to witness, that any of provisions are not run by Russian Federation” – Makeev said.

According to his opinion, for Ukraine is important to hear from Russia that they are ready for Donbas conflict escalation. “Our expectations is for Russia to admin need of de-escalation” – Makeev noticed.

It is to be recalled that today evening in France capital was planned meeting of foreign ministers from Ukraine, Germany, France and Russia for consideration problem of regulation situation on East of Ukraine. Preliminary figures indicate, the meeting will be behind closed doors.