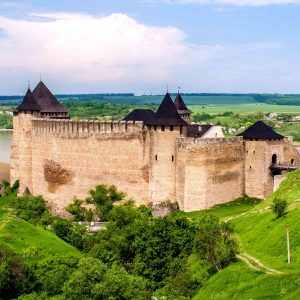 Castle and city Khotyn left noticeable mark in history of Ukraine, Moldavia, Poland, Russia and Turkey. It is known that on a territory of future city was leaving Slavic tribes tivertsi (VIII – X centuries). In 2002 the city celebrated its millennium. Academics admit that at the turn of X – XI century on the naze between Dniester and deep canyon of stream, which doubled it from west and north, was built wooden-earth duke fortress.

The fortress was situated in the borderland between important trade routes – river and overland. This is proved by found treasure in Khotyn in 1899, which had more than thousand west-european bracteates XII – XIII centuries (thin silver coins with unilateral picture).

In the middle of XII century, in the time of Danilo Galitskiy, wooden fortifications in the south part of naze were changed by stone walls, which part (7.5 meters high) was found by archeologists in stone wall, built in XV c. (wooden wall was fastened with “opus signinum” – white lime with dropped bricks).

That was also when on a fortress territory was built church with bricks and stones.

In the latter half of XIV century Khotyn became a part of Moldavian principality. From the end of XIV c. Moldavians and Armenians began to settle Khotyn. In October of 1408 century Moldavian voivode issued a revenue ordinance, where Khotyn customhouse was noticed on the way to Kamianets-Podilskiy.

Since thirties of XV century Khotyn was attacked by Polish feudalists. In 1450 – 1455 years tha castle was a polish garrison.

In Fortress of Khotyn were worked chances: was increased castle area, level of the yard was raised up to 8-10 meters, and were built high towers (near 40 meters) and thick walls (over 5 meters). The towers were made as giant stone columns, which forefoot - rocky monolith – was besieged by stones.

Eastern wall, situated in the rock, which goes down to Dniester, is straight, and Western wall is cambered. At the top of the walls were the way loopholes for upper battle. 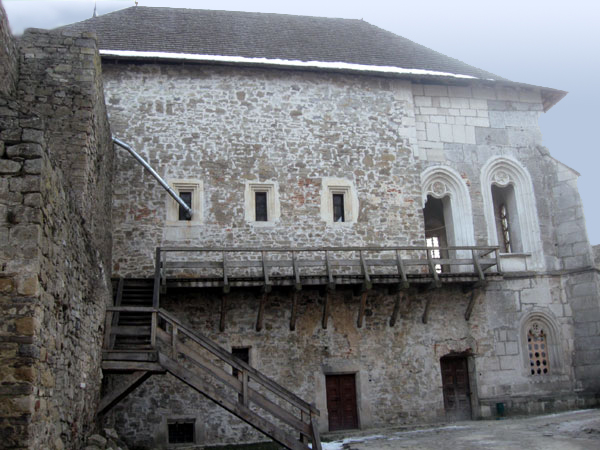 There was a legend, that while building the castle, a girl was mured inside a wall. It was to explain origin of wet spots on walls. In sober fact, they appeared in a place of ancient moat, which was whelmed in XV century.

Builders of Khotyn Fortress adorned white-grey limestone walls with geometric ornament of red bricks of the six-eight stripes in square and pyramids forms.  Three-level pyramids fulfilled a function of averter. It was so called saint “Tetractys” (triangle with for surface levels). Pyramids were crowned by Greek cross – ancient Khotyn symbol.

In the yard were built two palaces with gates between them and deep cellars. From the east side of the palace, going through passage, you can reach little chapel. 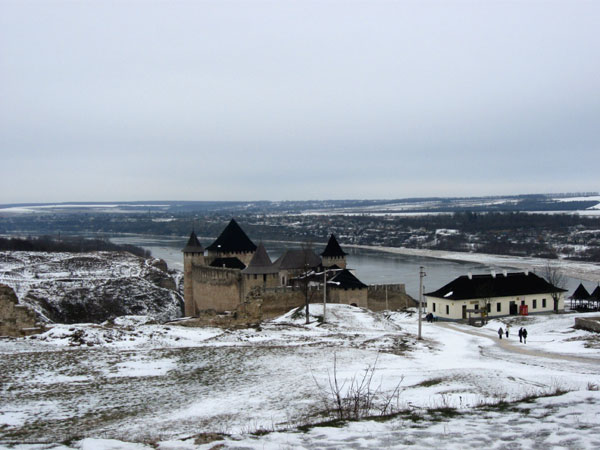 In actual fact, in XVI century the fortress was permanently attacked by the Poles, the Turks and the Tatars. Because of that, the castle was destroyed in some parts. Actually was abolished east castle and south-west tower. In the forties Khotyn Fortress was rebuilt. Its yard was enlarged in 25 meters in south direction, was built new Gate Tower. But in that time, new walls were not decorated by ornaments.

In the XVI-XVII centuries Khotyn was a center of race for power with Moldavian dukedom. In 1572 in the castle was quartered Polish-Cossack garrison with a head of Dobrosolskiy, which successfully sustained a siege of Turkish army.

In autumn of 1650 Khotyn was occupied by the Cossacks. After March Governor Vasile Lupa gave his daughter in marriage to Timosha Khmelnitsky. In September 1653 on the opposite bank of the Dniester Poles built a fortified camp. V.Lupa had to leave Khotyn.

By counterscarp held hidden wooden fence road you are driving on light gun. Stone wall and fortress defended by the Dniester. The castle had four gates and a few moves. In 1712-1718 Turks not only pushed the line of defense of the citadel, but also set up camp for tens of thousands of soldiers. However, during the Russian-Turkish wars the fortress three times was captured by Russian troops. 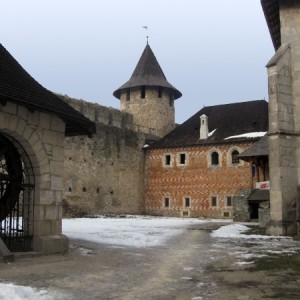 First the castle was surrendered August 19, 1739, after troops under Field Marshal Stavchanami B. Miniha defeated 80-thousand. Keys to the commandant of the fortress gave Ilias Pasha Kolchak (his descendant - "supreme ruler" of Russia in 1919).

November 26, 1806 Russian troops entered the General Michelson. In 1812, at the Bucharest Treaty Bessarabia (east of the Moldavian principality) was incorporated into the Russian Empire. Khotyn became a county town. In 1826, the city received the coat of arms on which the fortress was depicted with an open gate.

In XIX century significantly increased the number of inhabitants of the city: from 3.4 thousand in 1819, to 18.4 thousand in 1897. Among them were many Russian (officials, clergy, nobles, merchants, Old Believers) and Jews as well as Poles, Germans. In 1856, Khotyn fortress of the military department convey to the City.

In November 1918 Khotyn Fortress was captured Romania, and in 1940 the city was ceded to the Soviet Union.

Filmmakers have repeatedly used the image of the embattled castle on the banks of the mighty river.