Kamianets-Podilskyi Castle was built for protection of Turkish bridge, which was connective land neck between Old City, enclosed in a loop of the river, and the "mainland".

On the ground of archaeological remains, on the territory of present-day castle in IX – XII centuries was a citadel with earthworks and wooden wall, which protected Slavic settlement of Kingdom of Galicia–Volhynia.

Wooden defenses were changed by stone after fire at the turn of XII and XIII c. In 1240 Batu’s hordes, the ruler of the Golden Horde, breaking walls, stormed into the city and killed all citizens. In consequence of this thing, Kamianets lived under Mongolian and Turkish rule for over a century.

Tatarians were defeated in Blue Waters in 1362 by Grand Duke of Lithuania Olgerd’s forces. The fortress was left to dukes’ nephews – Alexandr, Yuriy, Boris, Konstantine and Fedor. During Lithuanian dukes’ ruling, the castle was experiencing a challenge and began to acquire its own unique look thanks to donations of small gentry and merchants, and the Popes, who send to Kamianets "alms of St. Peter".

Due to strives between Vytautas’ heritors after his death, the fortress passed to control of Polish-Lithuanian Commonwealth (1434-1793). Later during small time, it was part of the Ottoman Empire. This period was marked with attainment of deemed strategic and became center of Polish voivodeship  and was granted the status of royal city. 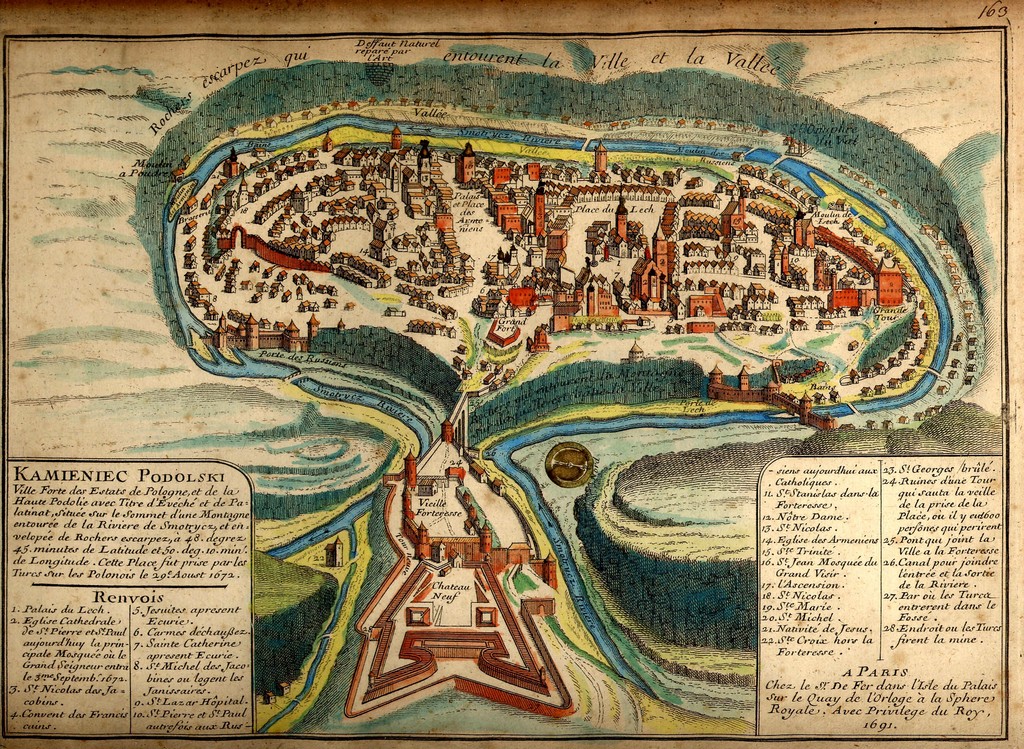 In Polish ruled time, Kamianets-Podilskyi Castle took final look thanks to numerous of modernizations, the main of which was reconstruction of fortress in 1621 under the direction of engineer Theophilus Schaumberg for artillery defense adaption.

In XVIII century Turkey was forced to return Kamianets-Podilskyi Castle to Poland, according to Kamianets Karlovitskogo peace treaty. From that moment castle lost its religious significance for Christianity, but the Polish authorities continued to maintain its combat readiness, allocating funds for its reconstruction.

During the Civil War (1917 - 1923) in Kamianets repeatedly alternated power: Ukrainian nationalist, Bolshevik, German - Austrian troops succeeded each other. For a short period (February 1919 - November 1920) Kamianets -Podilskiy even became the capital of Ukraine after the Directory and UNR government capitulated from Kiev.

Thanks to strength, created by people together with nature, Kamianets-Podilskyi Castle has a reputation of “built by God’s hand”.

The central part of the fortress, also called the Old Castle is a closed irregular quadrangle fortress walls 1.5 hectares with eleven towers on the perimeter.

From South (left from central entry) bastille is protecting by: 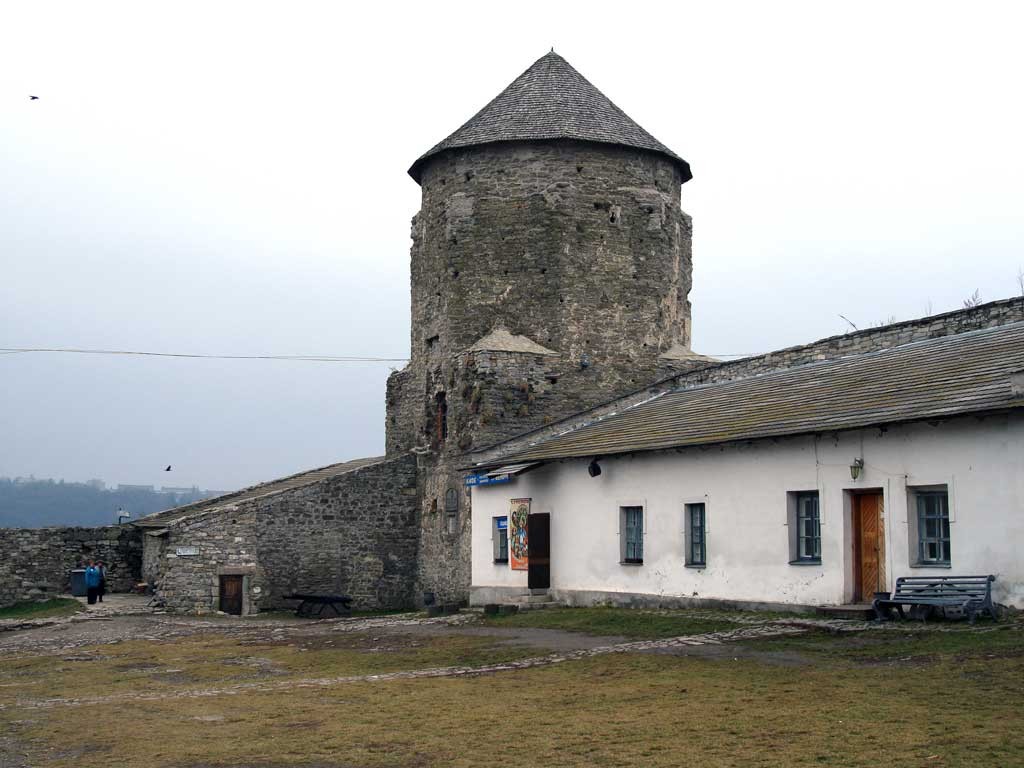 At the beginning of the XIX century it was in this tower three times was imprisoned leader of the peasant movement Ustim Karmelyuk (1787 - 1835). 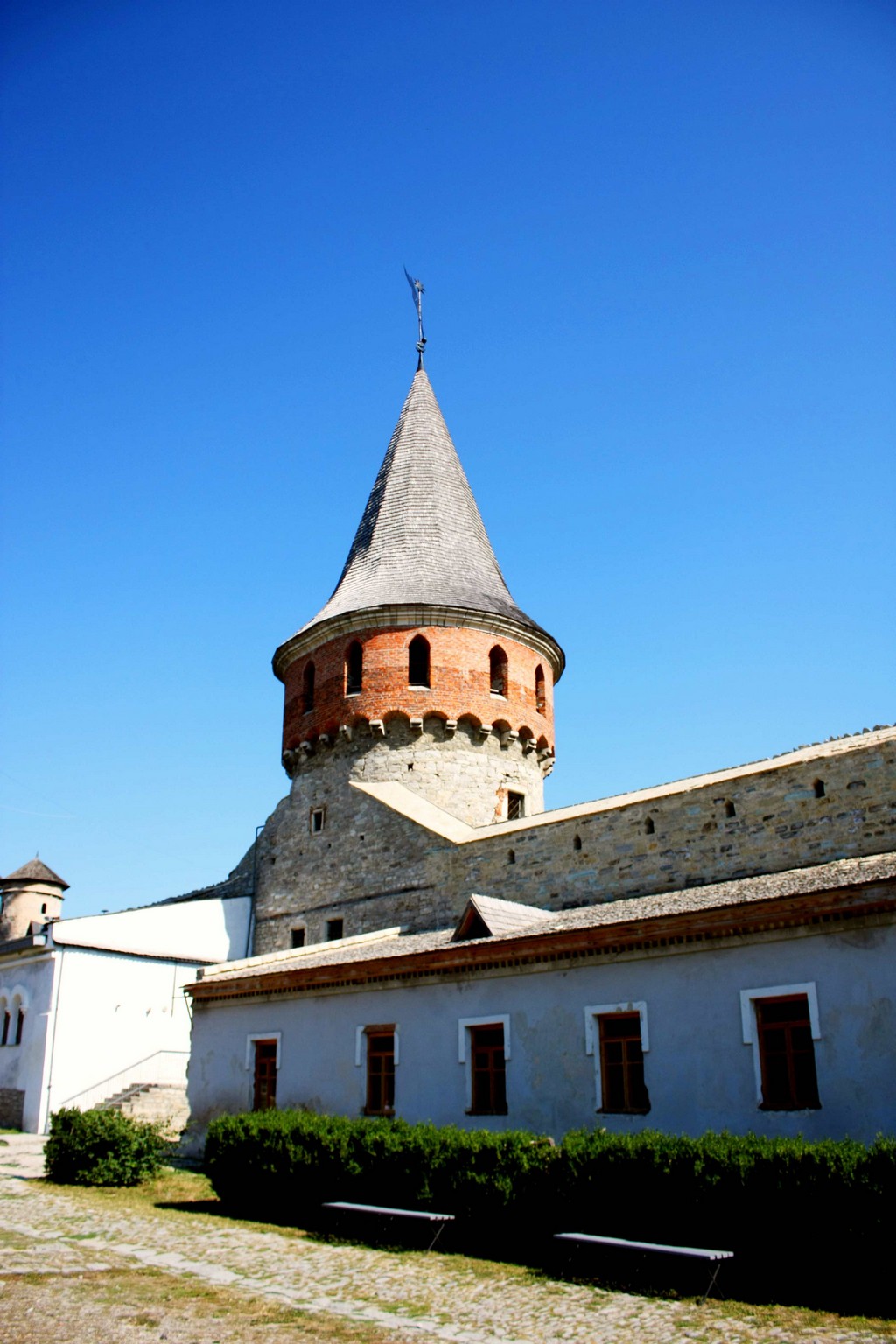 This is followed by Cap Tower (end of XIV century. - Beginning of the XVI century.), Built in the shape of a cylinder with a conical roof. It was significantly upgraded in 1544, when the foundation was strengthened, plastered facades; pass inside the walls replaced by an external on the north side. 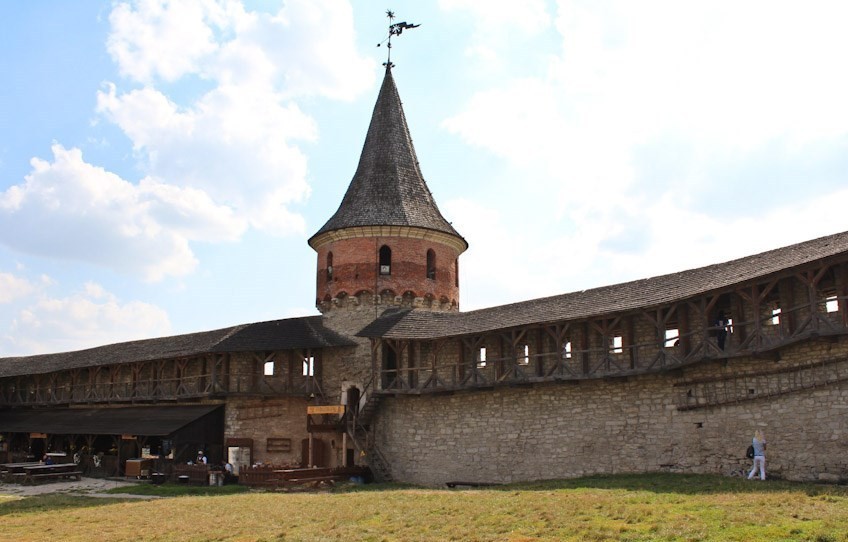 Name of this tower, which was built in the beginning of XV century, was connected with visiting Kamianets Krakow castellan (administrator of the castle, in charge of its safety and normal functioning) Jan Tęczyński (? - 1405).

Architectural feature of the tower is its siting – for three-quarter off-site the Old Castle – and fifth layer, which, thanks to brackets, in 0.9 m larger than the diameter of the main part.

For higher safety in XVIII century on the outside of the castle, the tower was whelmed practically up to forth layer. Now it has 21 meters high.

Situated forth left of the entrance cylinder four tiered tower (beginning of the XV century) got its name for the storage of Episcopal values. The name of the "White" is associated with the physical properties of the tower – white dominates in its masonry. 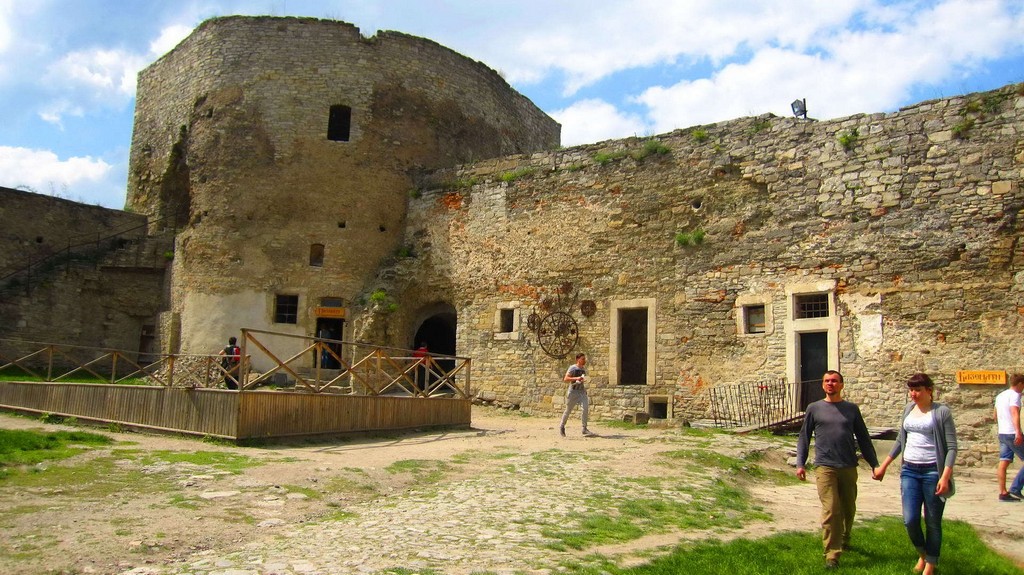 An interesting architectural specialty of the tower is the inscription on the wooden door in Latin: "A faithful friend is rarer than phoenix " .

The second layer of Laska tower in 1544 was significantly altered: equipped with through-the-wall stairs, walls were plastered; fighting was only the fourth layer. Now its height is 22.5 m.

From the West (straight from the entrance of the castle) for the defense of the fortress are in charge:

The oldest tower (XII - XVI cent.) is in the perimeter of a rectangle with a lot of loopholes.

She served as the main strategic vantage point of the castle, where was placed on its top a wooden superstructure, and a springboard for the delivery of guns on the upper tier of the new tower.

The main architectural feature of this tower is the lack of a roof.

August 25, 1672 after the explosion of the Turks during the Turkish - Polish War (1672 - 1676), the tower was badly damaged and the defense of the castle was surrendered. 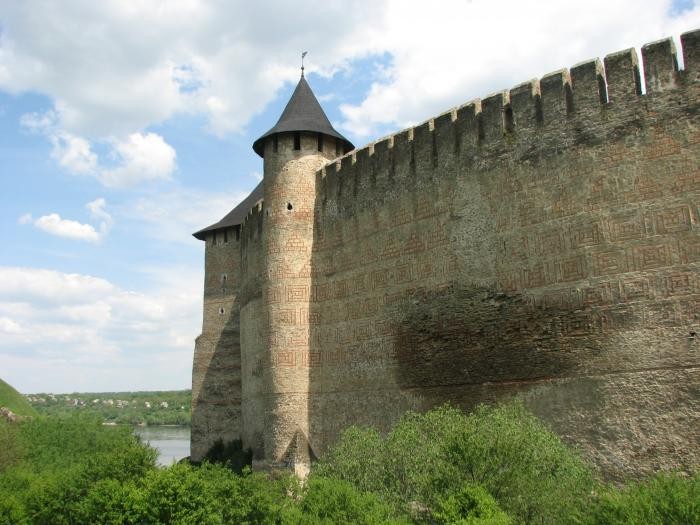 The tower is completely outside the fortress and it has a common wall, which extends the possibilities of maneuvers at the time of warfare defending the defenders of the castle.

Small western tower, designed to strengthen the defenses of the castle from the west, was built by I. Pretfers along with a Big Tower. Together they provide reliable protection of one of the weakest of the walls of the castle, and that led to their practical compound forming almost another outer wall.

From the north (to the right of the entrance to the castle) approaches to the fortress to protect:

In its lifetime, this pentagonal tower with a hipped roof has seen many battles, it has been restored not once.  Architectural feature of the tower is 40 m deep well with wooden wheels, with a diameter of 4.5 m, for lifting water.

Cylindrical tower (the beginning of the XVI century.), Situated near the Black to the right of the entrance to the castle, was built at the expense of Jan Lassa (1456 - 1531) - Primate of Poland (the head of the bishops of the country), as evidenced by its stone coat of arms "Ship" on the southern facade: the ship under sail and episcopal miter. 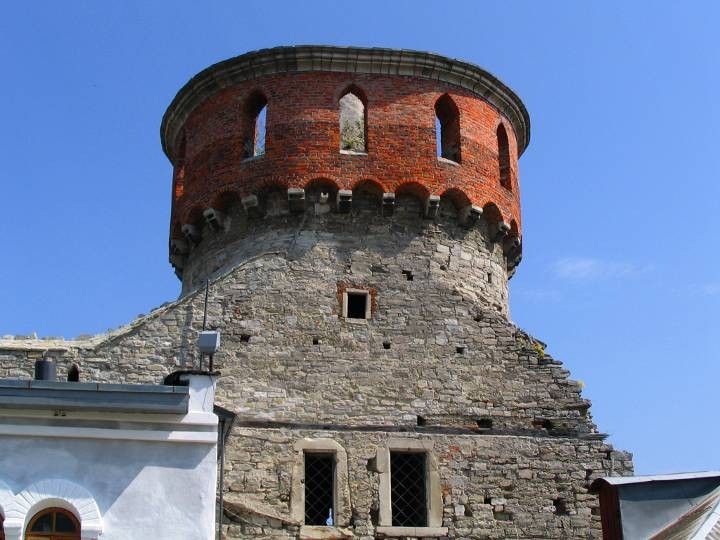 A small gray cylindrical tower (early XV century) with a conical roof, built into the north wall and overhanging the outbuildings, acted as the lookout for the garrison commander, and loopholes designed to provide additional protection to the city.

The memorial table of the north - east tower (third from the right of the entrance) says "Tower Kreslava, the Bishop Vladislav, who own means finished construction of the castle in 1505" that dates back to the end of construction of the original stone castle at the expense of the bishop Kreslav from Kurozvenki in 1505. 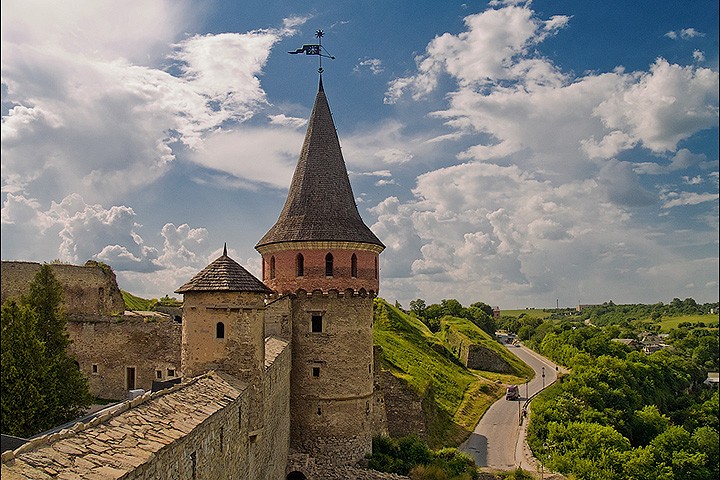 Made outside the fortress, the Water Tower served as the main source of water during the siege, helped by its location - in the canyon on the bank.

The tower was carried tunnel to the Rozhanka Tower, details of which there was only the commandant of the fortress.

In the XVII century, to improve the defense capabilities of the fortress T. Schomberg developed, according to the latest achievements of Dutch art of fortification, and implemented the project of the new fortress, consisting of Northern and Southern bastions. New fortifications fortress consists of a system of fortifications, ramparts and moats, which were connected to the old castle on the means of suspension bridge. Within the premises of gross disposable military purpose (barracks, warehouses).

At present, New Castle survived much worse than the old, which presumably due to an error in the design (its height exceeds the height of the Old Fortress so its partially dismantled).